Ask any old digger at Piha about the surf scene in Auckland in the 70s, and you can be guaranteed one name will come up every time: Brian Weaver Surfboards, the legendary surf-shop, factory, hang-out, place to be on the main drag to Piha, along West Coast Road in Glen Eden.
Brian ‘Willie’ Weaver was 27, married and slaving 12 hours a day, seven days a week in a factory job as a fitter and turner to feed his young family, when he took the luxury of a night off to go to the pictures. The movie was called “Gidget, an old classic on the Californian beach scene. Something clicked. He told his wife Noeline he would stop working on Sundays, bought a kitset surfboard from Levene’s for 15 pounds and headed for Piha. 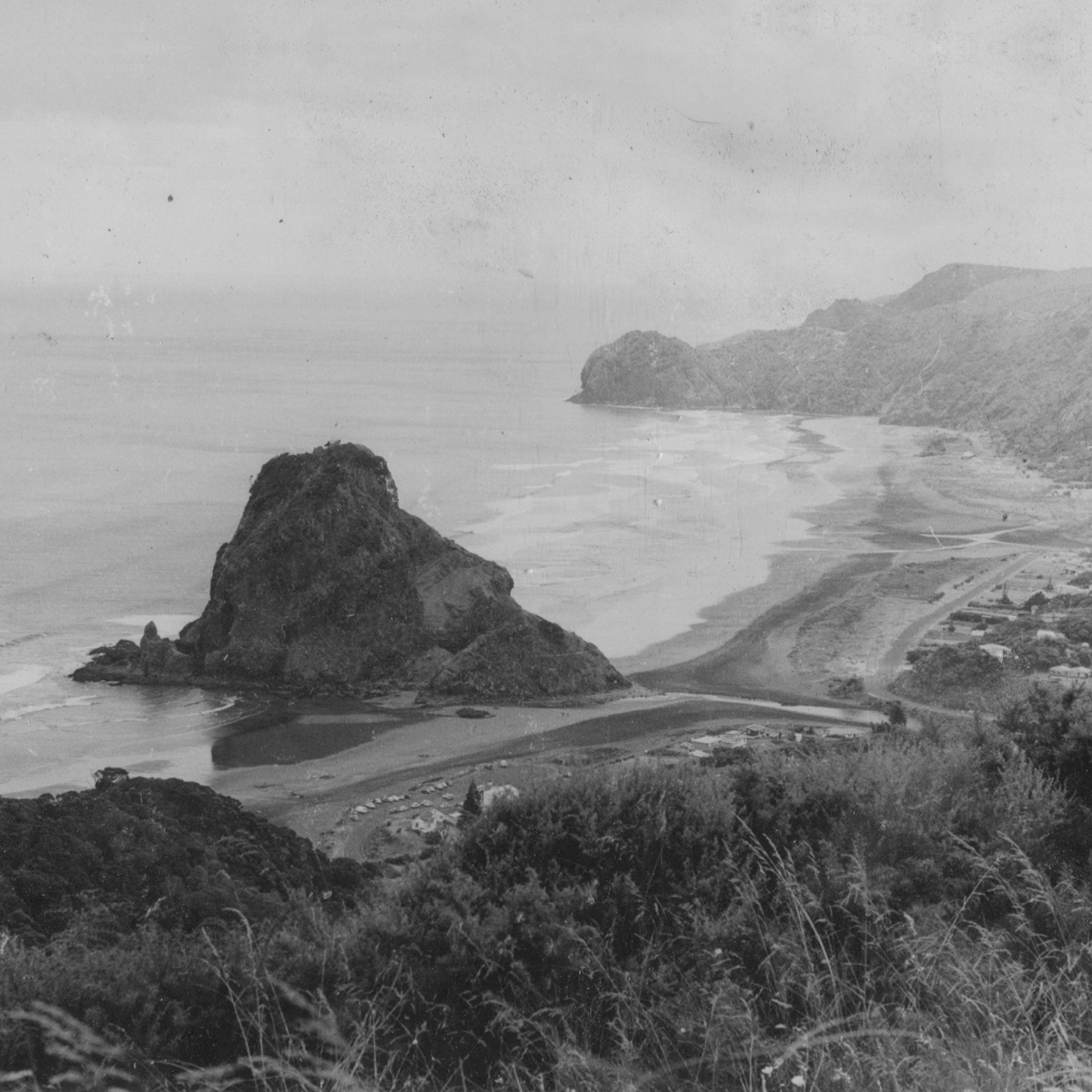 It didn’t take long before he was introduced to Peter Byers, the first New Zealander to make surfboards at Piha. Peter not only supplied him with a custom-made board, but also gave him a glimpse of a different lifestyle. Brian saw a living could actually be made out of making surfboards, and it seemed to be a good alternative to his factory job. “So one day I was talking with a mate of mine, Kevin Doyle, about the idea of setting up a business together making boards and calling it KB Custom Surfboards (Kevin & Brian). Another friend was there and said, ‘I’ll buy one”. We had no idea about making boards but had sold the first board before we even made it!
But Brian possessed that special talent: a combination of Kiwi ingenuity, handyman skills and a ‘give it a go’ attitude. His fitting and turning skills came in handy. The basement of Brian’s house was transformed into a factory and he never looked back. Word spread around. Within one year he was making more money under the house than he could have ever dreamed of in his old factory job. “We started with boards that were 9′ -10′ long. Within a year they went down to 6 foot. We’d experiment with all sorts of different shapes. I was suddenly considered an expert. It was quite weird. People used to ask me for advice about board design, but I didn’t really know what I was doing half the time.

We had no fridge in those days and the butter used to go off all the time with the smell of resin drifting up through the floorboards. The kids finally resigned themselves to constant foam dust in their eyes.BrianWeaver

The house filled with a constant flow of people, and Noeline was not always impressed. “We had no fridge in those days and the butter used to go off all the time with the smell of resin drifting up through the floorboards. The kids finally resigned themselves to constant foam dust in their eyes.”
Then the Council came around because the neighbours complained” So they moved the house, first to a garage on portage road, then to very tiny premises on West Coast Road, just before enter-ing Glen Eden township. While at the Glen Eden Post Office one day (then on the corner of West Coast Rd and Glendale Rd), Brian looked at the old butcher shop for sale next door. He made inquiries, and after some wheeling and dealing bought the shop on West Coast Road for $9000 It became ‘Brian Weaver Surfboards’, the ‘in’ place to hang out and a compulsory stop on the way to the beach for every serious West Coast surfer in Auckland.
Business was good. But the biggest buzz for Brian was the change of scene. “I met an incredible amount of people. They just came from nowhere.’ Paul Shanks started his first job at Brian Weaver’s. So did Grant Bull, and Paul Brown and Brian McKenna, now living (and surfing!) at Piha. 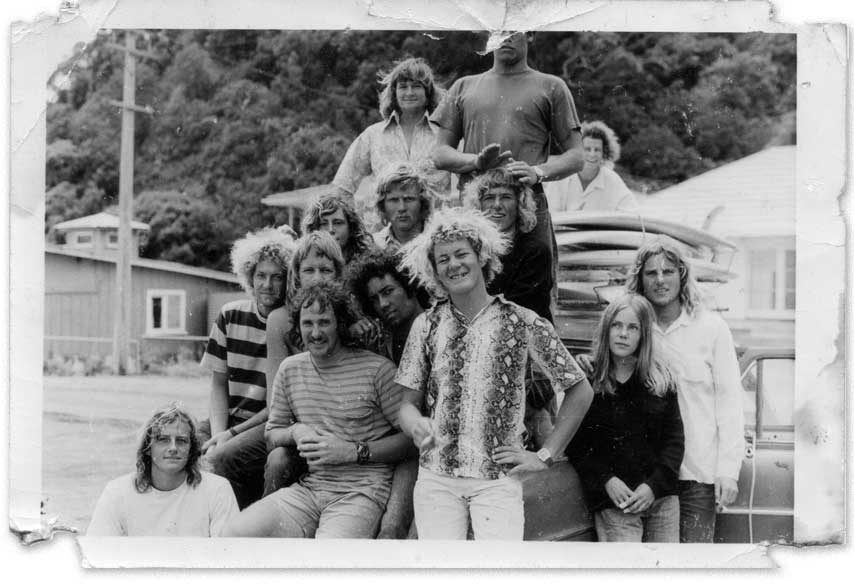 In those days of controlled imports, materials were hard to get There were restrictions on just about anything, including the importation of blanks. Brian, ingenious as ever, decided to make his own moulds and blow his own blanks. Requests for imports by other surfboard makers were turned down by a protective government and referred back to Brian, who was soon supplying most of the NZ surfing industry with his ‘W’ blanks. Small but essential items like tints, plywire and squeegies were also hard to come by. So in 1973 Brian went to Hawaii and simply stocked up.
He also was the first in NZ to make legropes – out of orange spongy rubber with nylon inner string. They had little flexibility (only the rubber would stretch) and were more or less lasso-looped around the ankle. Those that remember them talk of the tourniquet effect they had, slowly tightening after every decent wipe-out, and the agony of trying to get them off afterwards.Again, Brian picked up his tools and built the ultimate surf wagon with roofracks that could hold 10 surfboards.

Those that remember [the legropes] talk of the tourniquet effect they had, slowly tightening after every decent wipe-out, and the agony of trying to get them off afterwards.

‘We used to go to the East Coast quite a lot In those days we’d surf as much on the East Coast as on the West Coast. We didn’t read weather maps. We’d just go and there was always something there. It seemed more consistent in those days. We’d drive extraordinarily long distances. We’d do daytrips to Shipwreck, although with state of the roads the return trip would take us more like two days. It was not so different from today in regards to the surf fashion scene. You had be seen in the latest gear advertised in American surf mags, like levis and sandshoes, once again hard to get because of import restrictions. If you had those, you were winning! In those days the East Coast and its surfers were more the focus of surfing. There were very few surfers living permanently at Piha, whereas many did on the North Shore of Auckland. West Coast surfers were a different breed, rougher and tougher, used to bigger surf. An exception, making a big impact was North Shore surfer Wayne Parkes, when he ripped on a perfect solid eight foot Piha Bar in i973, with a keelfin board. The moment was captured on film in the classic NZ Surf movie “Beautiful Day”, by Andy McAlpine and John Cassidy. It was a real expedition to go to Piha ever the windy, metal road. Karekare was pretty much unknown territory, and called “Spot X”. The one advantage, compared with today, is that you could actually drive all the way down to the point. It was a very dedicated bunch that would make the effort to go out there. There were the ‘shop boys” grommets, Roach, Cuttie, Jock and Rick, who would catch the bus to Piha outside Brian Weaver’s on a Friday night and crash underneath what is now Bon’s takeaway shop on the beach. Us grommets used to get dealt to all he time by the older Weaver crew” remembers Roach. “There used to be an egg farm along the Piha Rd. Whichever carload would get there first would buy trays of eggs, hide in the bush and egg the next cars coming along the road! “Clive Brown used to have a MarkII Consul. He’d jam a walking stick on the gaspedal and cruise along with his feet hanging out. They’d turn the motor off coming down Waiatarua and see how far they’d get. The things they did you wouldn’t want to see kids do today,” says Brian. “It was a miracle there weren’t more accidents. But cars were sturdier and slower and there were less of them in those days! The NZ competitive scene was in its infancy in the 70s. Brian was a generous sponsor of young talent. “We started a Club, West Coast Surfriders I think it was called. There were guys like Grant Bull, Paul, Mark, and ‘lend me some wax mate’ Alan Shanks, Mick the Dick, Brian McKenna, Jeff Young, Colin Driver, Ian Margan and Paul Brown. We organised the first Auckland Champs! Paul Shanks was working at Weaver’s when he was selected to join the first surfing team to represent NZ at the World Champs in San Diego in 1972. There was a great social scene going at the shop. The gravediggers from the Waikumete Cemetary would come around to play darts. Roach remembers the Friday night sessions well. “Brian really looked after us young groms. Not only was he a generous sponsor, but he also provided a venue for us to go and hang out together! “We used to have these huge out-door Christmas parties behind the shop,” recalls Brian. “The gravediggers would put down a hangi with a cross on top. The owner of the Foundry Nightclub (also a surfer) would organise a band. We’d have about 200 people. The police would go round and round the block, not quite knowing what to do with such an unusual scene! Brian and Noeline still live in the same house where it all started in Blockhouse Bay. The kids have long gone, and today Brian runs a business building boat hatches. Where once stood the surfshop is now a vacant lot. Brian no longer surfs, but talking about it has brought a gleam to his eye. “Those years were the most exciting of my life. Before I started surfing and making surfboards, I was working really hard, I had a family to support at a young age and we were poor. It was not so long after the Second World War, and people were quite stodgy. When I got into surfing I suddenly had a second chance at feeling young and alive again, having fun and making money, working for myself. I really enjoyed the interaction with young people. Yeah, I’d like to make surfboards again. Maybe as a retirement project”
-New Zealand Surfing Magazine.